Jacquotte Delahaye, better known as Back from the Dead Red, was said to have turned to piracy as a means of supporting herself and her ‘mentally challenged brother’ after the murder of their parents. In her pirating career she was said to have spent time dressed as a man, commanded hundreds of pirates, captured Fort de la Roche, oh and faked her own death. But, with no primary sources to document her life, and the French fiction writer Léon Treich being responsible for recounting her exploits, people have questioned whether she was real. This post is going to look at her story, why people believe she is a work of fiction.

Disclaimer: Sagas of she is a participant in the Amazon Services LLC Associates Program, an affiliate advertising program designed to provide a means for sites to earn advertising fees by advertising and linking to Amazon.com. This means that if you make a purchase through one of our links we may earn a small commission. To find out more click here

The details of Jacquotte’s life are scarce, we do not know when she was born but it is said she was from Saint-Domingue in modern day Haiti, possibly to a French father and Haitian mother. She had one younger brother who was said to have suffered a mental disability, which some modern scholars including Laura Sook Duncombe believe to be Autism. In some versions of Jacquotte’s story, her mother died whilst giving birth to her brother, and her father was murdered by either British or Spanish assailants. Another version paints a more dramatic picture; “A young girl cowers with her small brother in the corner while their parents are killed in front of them in their own home.” Whichever version is believed, Jacquotte’s motivation for turning to piracy was said to be a mix of revenge and a necessity as she needed to support herself and her brother.

With a young brother to support Jacquotte worked as a barmaid and lady’s maid, until she began her pirating career, where she quickly rose through the ranks and was soon in command of a hundred men. At the time Jacquotte was said to be sailing, the main target for pirates was the slow moving Spanish ships laden down with goods from the New World. Whilst most agree that Jacquotte dressed as a man at some point during her pirating career, when this occurred is debated. Some sources suggest that  she began her pirating career dressed as a man, whilst others say she dressed as a man after faking her death during battle. It is the faking of her death and her bright red hair that earned her the name ‘Back from the Dead Red.’

Her greatest success was the capture of Fort de la Roche on the Island of Tortuga in 1656. 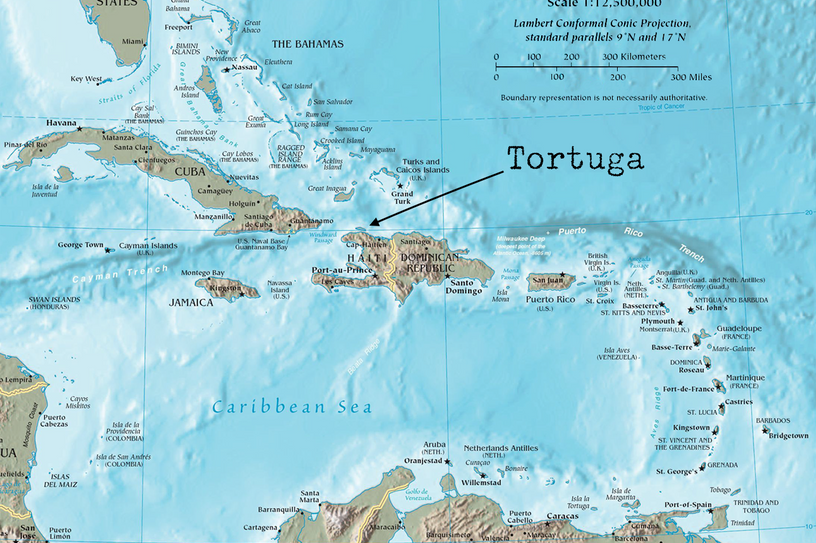 Control of Tortuga was contested “…variously controlled by the French, Spanish, and English, to say nothing of the native Taíno population.” It was first used by pirates in the early 1620s. Jean La Vasseur, the French governor was “…a friend to the buccaneers and happy to have them around, as long as they shared some of their booty.” It was La Vasseur who built Fort de la Roche also known as de Rocher in 1639 to defend the island from the Spanish who had raided the island several times. Laura Sook Duncomb described the fort as;

“…built high on a hill near the harbor, accessible by ladder. Niches were carved in the rock below to shelter the men defending it. It was a nearly impregnable fortress, vulnerable only from a nearby mountaintop.”

The Spanish took possession of the island in 1654, but lost it to the English in 1656. It is possible Jacquotte aided the English in taking the base as the English were friendly to pirates, and there was a history of pirates helping to repel the Spanish, because Spain were hostile to their presence on Tortuga. Once the island was taken she established a “freebooter republic” and died in the 1660’s defending the island from the Spanish;

“With forty Spaniards against only three buccaneers, the obvious choice would have been to surrender, but Jacquotte’s death is fitting for a true pirate: going out guns blazing rather than fading into obscurity.”

A fitting end for one portrayed as a heroic figure, who turned to piracy to support herself and her brother.

There is no mention of her brother after she began her life as a pirate, and she never married and is often described as a ‘loner’ whilst there is no primary source to confirm it, Jacquotte is said to have said, “I couldn’t love a man who commands me-anymore than I could love one who lets himself be commanded by me.” Although no official documentation exists, some suggest she had a daughter named Dinah Delahaye who, “…shared her mother’s striking red hair, and who grew up to become a master swordswoman, and pirate commanding a small fleet of ships.”

Some claim that Jacquotte teamed up with fellow pirate Anne Dieu-le-veut, however, Annie did not arrive in the Caribbean until after Jacquotte’s death, so it is likely they were confused for Anne Bonny and Mary Read who were two female pirates from the Caribbean.

In the first of our pirate posts we looked at the lack of primary sources associated with female pirates, especially those of ‘low birth’ this is important when considering whether Jacquotte existed. Her story varies from source to source, with many of the details coming from the French writer, Léon Treich in the 1940s. The only consistency being her flaming red hair.  There are no primary sources which mention her life or exploits nor are there any first hand accounts which mention her. The Spanish author Germán Vázquez Chamorro in his book Mujeres Piratas (Pirate Women) claimed she did not exist but was “…added into the lore of the buccaneer period to make the ruthless men more palatable to the modern reader.” She was certainly created as a sympathetic character; forced to turn to piracy after watching her parents being murdered and then left to support herself and her mentally challenged brother.

Did Jacquotte really exist? We will likely never know, and whilst this is frustrating it is fun to believe that she and other female pirates existed. Women of all races and classes were part of the Caribbean colonies but they have been left out of history and their stories lost. Even if a work of fiction Jacoquotte and other female pirates such as Anne de Graaf give them a voice.

Pirate Women: The Princesses, Prostitutes, and Privateers Who Ruled the Seven Seas